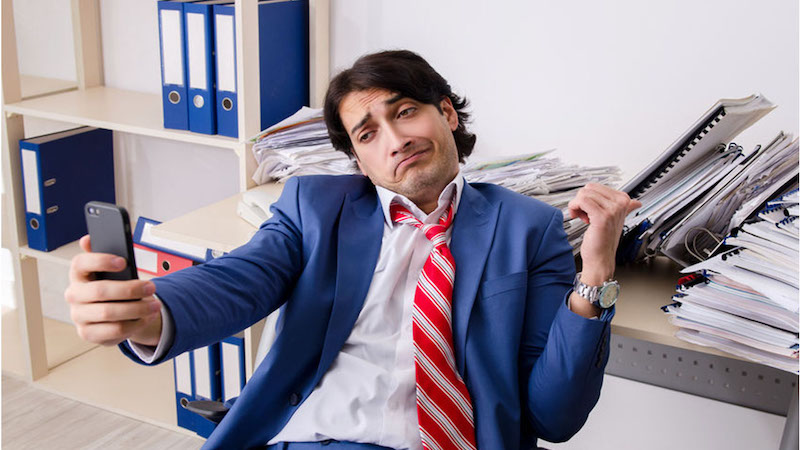 Are your business video communications letting you down? Read on to learn about how to film a better business selfie video.

COVID restrictions have seen an explosion in video communication for all sorts of purposes, not least in the business realm. While video has been a mainstay of personal communication for several years, business people have generally preferred a face-to-face approach, in the form of a good old-fashioned meeting or seminar, when a phone call or email won’t suffice. However, there’s nothing like a worldwide emergency to make us re-evaluate how we do any number of things. As a consequence, more and more business teams are meeting via video conferencing on Zoom, Hangouts or Teams, and more and more information and training is being disseminated to workforces via video messaging of one sort or another. Meanwhile, schools and universities have increasingly turned to video for teaching. From global commerce to classrooms, video has become the unrivaled king of comms!

However, along with the proliferation of the awesome technology that has enabled this communication revolution, there’s also been an equally awesome proliferation of poor and even dreadful practice in using it. Indeed, just as the capabilities of phone cameras, unimaginable a decade ago, have paradoxically spawned a trillion absolutely awful photos; even a passing glance into the world of business video communication will reveal a similar situation. Fortunately, most of the faux pas encountered are pretty easy to avoid with a little insight, so if you find yourself having to use selfie videos for your work, you may want to read on.

Choose a good environment for sound

George Lucas famously said, ‘sound is half the picture’, meaning that good sound is every bit as important to the impact of a movie as what you see on-screen. This is just as true for an effective selfie video as it is for a Hollywood blockbuster. While you don’t need to record in Dolby 5.1 or spend a small fortune on mics and recording equipment to improve the quality of your video’s sound; you would do well to adopt a few good practices.

If you’re working from the office, there’s probably not a great deal that you can do about the acoustic environment. However, recent events have meant that many of us are working from home, in which case there are a few simple tricks for getting better sound: Try to record in a quiet room, that has carpets, curtains, and soft furnishings, rather than in a room with only hard, acoustically reflective surfaces, i.e., record in a bedroom or lounge, rather than in the kitchen. Too much room reverb (that echoey stuff) makes speech less intelligible and will, consciously or unconsciously, annoy those viewing your video, which is never a good start.

If you really have to record in an acoustically lively environment, try hanging up a nice thick quilt or blanket behind your recording device, to help reduce acoustic reflections off the wall in front of you. Better still, if you’re working on a table or worktop, fold the bottom of your quilt onto your work surface, under your recording device; now you’re reducing reflections from two surfaces, which will help a lot.

If you really can’t do anything about your recording environment and particularly if you’re working in a shared space, the addition of a simple lavalier or lapel mic to your kit will be an absolute godsend. A lavalier mic can be positioned nice and close to the sound source, your mouth, thereby increasing the ratio of signal (the sound you actually want to hear) to noise (all other extraneous sounds) in the background. You don’t have to spend a fortune on a lav mic and any number of suitable mics can be found on Amazon for as little as £30.00. Lav mics are available for mobile devices and laptops, with a variety of different connections, so be sure to get a mic that is appropriate for your device. 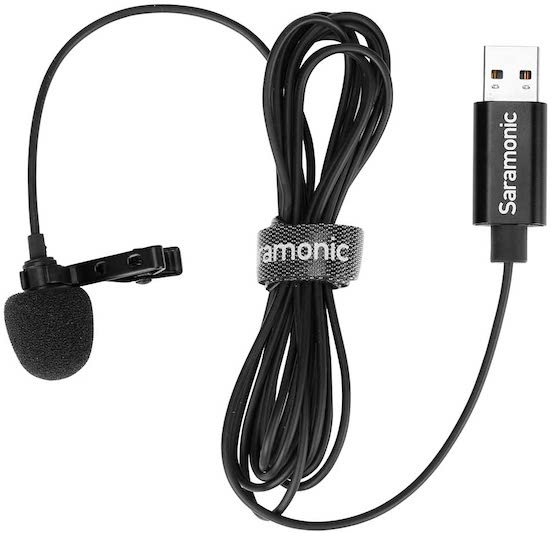 This Saramonic lavalier mic is designed to be plugged into a laptop’s USB port. Similar mics are available with mini-jack, Lightning, micro USB, and USB C connections.

A lav mic should be clipped onto your clothing about 20cm/8″ below your chin. If you’re really fussy, you can hide the cable under your clothing. One important tip when using a lav mic is to make sure you take it off as soon as you’re finished, as they’re easy to forget, and leaving the mic attached to your person could result in you walking away and dragging your laptop with you.

Try to ensure that your face is well lit and avoid having your back to a window or other bright light source, otherwise, you’re likely to appear as a rather sinister-looking silhouette. Poor lighting will also make your device’s camera struggle, leading to a grainier image, which may be OK for the background, but that will do your face very few favours! 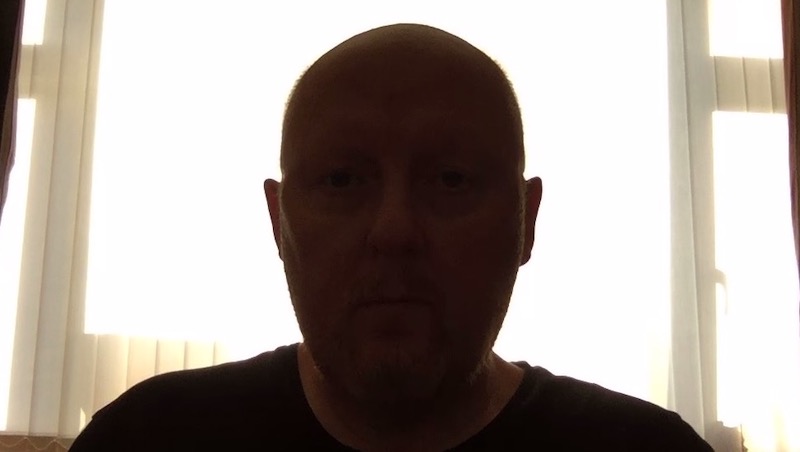 Make sure your face is well lit and try to avoid bright backlighting.

If you’re working in a room with central ceiling lighting that you have your back to, put a reading lamp on the table, behind your recording device, to throw some light on your face. If you’re getting unsightly shadows cast by your desk lamp, try using some A4 white paper or card to reflect some light into these. Alternatively, try diffusing the light with a little greaseproof paper or thin white fabric, but PLEASE BE CAREFUL to ensure that nothing catches fire, particularly if your lamp has a tungsten bulb fitted!

Generally speaking, your phone or tablet is likely to have a better camera and microphone than those found on a consumer-grade or company-issued PC laptop. Having said that, much will depend on the relative age of your devices. So, if in doubt, do a quick test recording. If you decide to use a dedicated camera like a DSLR or compact, don’t fall into the trap of thinking that this will automatically solve all of your problems, as onboard sound can be a real issue on consumer-grade still cameras and camcorders.

Put your recording device in landscape orientation and keep it still rather than hand holding it. Vertical video might be acceptable in some circumstances but, bearing in mind that we’re talking about business communication, most of your viewers will probably be viewing your message on a horizontal computer screen. If you’re using a phone or tablet, try propping it up against a pile of books, or something similar to get a good angle. A nice big lump of Blu Tack works wonders for positioning a smartphone and keeping it still.

Check that you have a decent frame composition before you start recording; there’s little worse than a video frame with someone’s face languishing right at the bottom of the screen, showing nothing below their nose. It’s also worth checking what’s in the background: is there something unsuitable on show, or is the background simply a bit of a mess? Generally speaking, a fairly plain background is less distracting than one that’s cluttered, or one adorned with posters or photos. 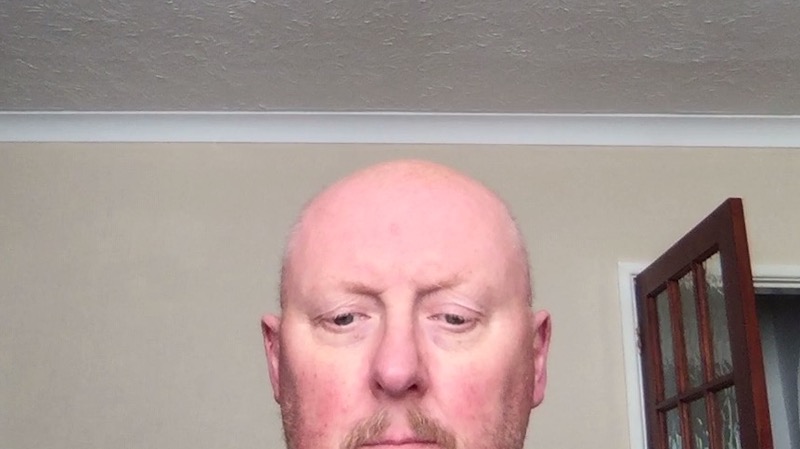 Poor framing will do you no favours whatsoever, so take the time to compose the shot.

Get better sound and better visual composition by getting in close

If you’re not using a lav mic, get in nice and close to your device to improve the ratio of direct sound to that of sound reflected off walls, etc. This will also improve your visual composition, placing more of the main event, i.e., you, in the frame. If you’re recording on a mobile device, or with something like a DSLR or camcorder, don’t be tempted to sit at a distance and then zoom in.

Look directly into the lens on your device, rather than looking at yourself on the screen. This will give the viewer the illusion of direct eye contact, rather than the appearance of you looking to one side of or beneath them. Remember that your video needs to establish a connection with the viewer, so maintaining some sense of intimacy, no matter how artificial, is important. It’s very easy to forget this simple tip and to start talking to yourself in the mirror, as it were, so place a post-it with an arrow pointing to the camera, or something similar, as a constant reminder of where to look.

While live conferencing services like Zoom offer little or no control over video resolution and quality, generally taking care of this very well by themselves; if you’re pre-recording a video message, there’s a lot you can do to damage the final product. For example, don’t be tempted to compress video files down really small in order to send them as email attachments; both image and audio quality will degrade significantly! It’s much better to upload them to a cloud account and send a link via email instead. Alternatively, use a file transfer service like WeTransfer or Transfernow, most of which offer a free transfer option for large files such as videos.

Another alternative is to upload directly to a free YouTube or Vimeo account, and then send out a link, but remember to set an appropriate privacy level if you don’t want your videos in the public domain. Likewise, social media platforms like Facebook and Twitter can also be used to share a workplace video but may be regarded as less professional, depending upon your intended audience.

Having said all that, don’t be tempted to record and share 4K selfie video files, just because you can. Frankly, you’re wasting everyone’s time and bandwidth by doing so, as 1080p or 720p are more than adequate for most business purposes. Besides, given that you’re probably recording on consumer-grade equipment, with less than optimum lighting, these resolutions will be more than good enough to preserve anything your recording device can realistically capture; despite what manufacturers would have you believe.

Mooma Media offers a range of video production services to individuals, small businesses, and not-for-profit organisations operating in the West Midlands region. Mooma offers competitive quotes to produce website or social media marketing videos and to film or live-stream events. To find out more about any of Mooma Media’s services, use the contact button below.

This website uses cookies to improve your experience while you navigate through the website. Out of these, the cookies that are categorized as necessary are stored on your browser as they are essential for the working of basic functionalities of the website. We also use third-party cookies that help us analyze and understand how you use this website. These cookies will be stored in your browser only with your consent. You also have the option to opt-out of these cookies. But opting out of some of these cookies may affect your browsing experience.
Necessary Always Enabled

Performance cookies are used to understand and analyze the key performance indexes of the website which helps in delivering a better user experience for the visitors.

Analytical cookies are used to understand how visitors interact with the website. These cookies help provide information on metrics the number of visitors, bounce rate, traffic source, etc.

Advertisement cookies are used to provide visitors with relevant ads and marketing campaigns. These cookies track visitors across websites and collect information to provide customized ads.

Other uncategorized cookies are those that are being analyzed and have not been classified into a category as yet.