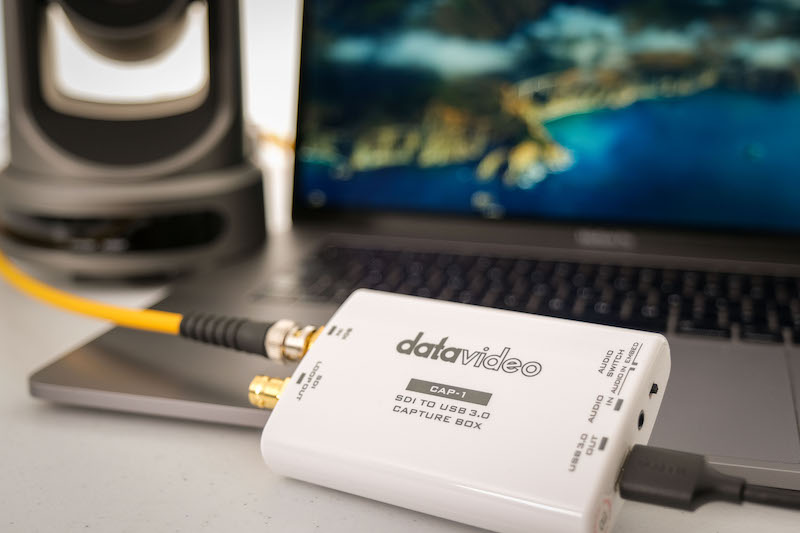 The COVID-19 pandemic has seen unprecedented restrictions in both our personal lives and our workplaces. One trend that has mushroomed as a result is the use of video in a huge array of day-to-day activities. Whether holding a conference call, delivering an online lesson, or streaming a product demonstration, video is now a crucial tool.

While many are content to suffer the slings and arrows of outrageously nasty webcams, a growing number of people want to take their online video presence further. While several higher-quality USB webcams exist, they can be rather expensive and are essentially a one-trick pony. Getting the video output from a regular camera onto the web has been possible for a long time. However, achieving this is often a rather convoluted affair, requiring specialist hardware and software along with a fair bit of know-how. In response to this, a new generation of plug-and-play video capture devices has emerged. This article looks at a pair of products from a US company, Datavideo: The Cap-1 and Cap-2 video capture devices.

Datavideo Cap-1 and Cap-2; not quite identical twins:

The Datavideo Cap-1 and Cap-2 are essentially the same in both form and function. The only differences between the two are that the Cap-1 has an SDI input and loop output, while the Cap-2 has HDMI  input and no loop output. Suffice it to say that this review effectively covers both, although from now on I’ll refer only to the Cap-1.

What’s in the box:

Full specifications can be found here. 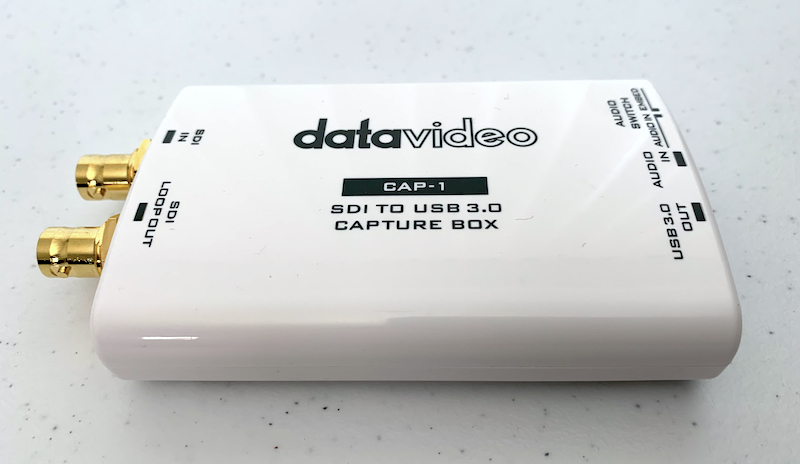 The Datavideo Cap-1: small, light and, white; and remarkably similar to the Cap-2.

Three words can easily describe the unit: small, light, and white. There’s no mistaking that this has been designed with a broader general public in mind. The vast majority of video equipment I’ve encountered falls into the functional but generally ugly category of things. However, this unit wouldn’t look out of place on an office desk or an influencer’s dressing table. The body is made from shiny white plastic with smooth rounded edges, making it easy to slip into a pocket or laptop bag. It’s clearly not a tough device, but then it’s not intended for the rigors of a regular production environment. While made of plastic, it’s so light that it’s unlikely to break if dropped, even onto a hard surface. You’d have to throw it! 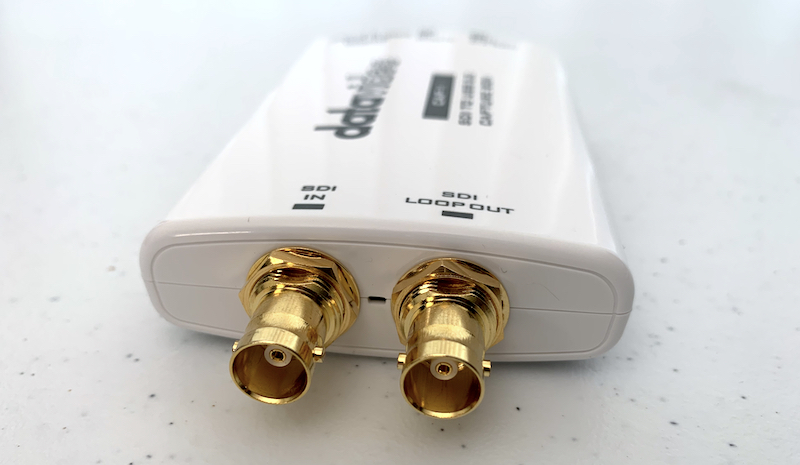 The only major physical difference between the Cap-1 and Cap-2 is the input and loop-out ports, with the Cap-1 having twin SDI ports, and the Cap-2 having a single HDMI (input) port.

There are no controls as such, just a switch to select audio inputs: more on this later. The SDI version has two SDI ports (input and loop output) that protrude from the device.  Also, at the other end, you will find an audio line-in, a Micro-type-B USB port, and an audio switch.

The Cap-2, HDMI version is a little more streamlined because the single input port is countersunk. The audio input jack also changes ends on this model. 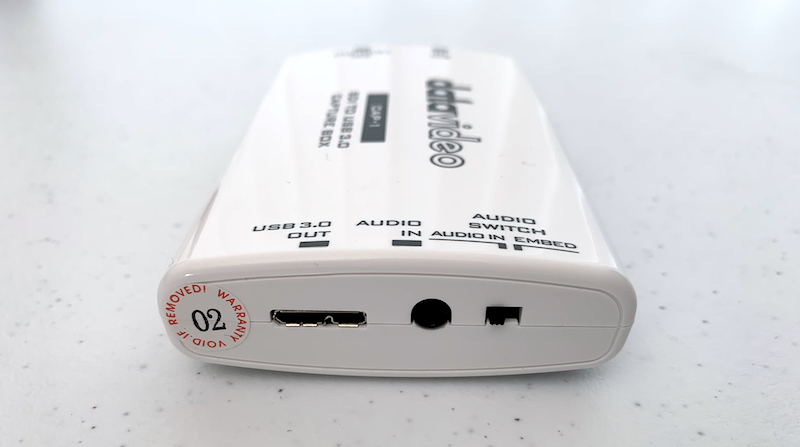 The opposite end of the Cap-1 showing the Micro-Type B USB port, audio port, and audio source switch.

The device is completely plug-and-play, with no drivers or additional software required for most intended uses. Live streaming via services like YouTube, Facebook, and Periscope can be achieved by simply selecting their camera option and hitting go. There’s no stream key or target URL to copy and paste, and no frame rate, resolution, or bit depth to set. Similarly, Skype, Zoom, Google Hangouts, Teams, etc, simply recognise it as your webcam. Video input is automatically converted to suit your target platform.

For more advanced users, the device plays nicely with broadcasting software like OBS, XSplit, etc. So, if you want the versatility of plug and play, or to have more control over your stream/recording, you can.

The device is USB bus-powered and doesn’t require any separate power supply or batteries. However, you need to ensure that both the USB port and the USB cable you use can deliver the necessary power. A USB 3 specification port is required, along with a USB 3 specified cable. For this reason, I assume, Datavideo advises, in very strong terms, to use only the supplied cable. I’m guessing they’re all too aware that many users might think that all USB cables are created equal.

The unit can be upgraded via firmware upgrade over USB, but this only appears to be possible via Windows OS, which seems kind of short-sighted, particularly as many content creators use Mac OS. I have to say that I found the firmware update procedure rather clunky. A very clear, step-by-step, well-illustrated help sheet is included in the download package, but the fact that this comprises six sides of A4 speaks volumes, almost literally!

Audio can simply be embedded in the video stream, straight from the camera. However, for those with more elaborate audio setups, YouTubers with a decent broadcast mic and an audio mixer, for example, there is a 3.5mm line-in available. This can be selected with a simple toggle switch.

It’s worth bearing in mind that as the audio input is line-level, you can’t simply plug a mic into it. I tried my Rode Video Mic Pro+ and although I got a signal, it was very quiet, even with a 20db gain boost.

It’s also worth bearing in mind that incoming video is delayed by a few frames. This will vary from camera to camera, but one or two frames output delay from video processing is quite normal. For embedded audio, this isn’t a problem as it gets delayed along with the video. However, this means that a direct audio signal will also need to be delayed accordingly if you want a perfect lip-synch. This video gives practical advice on how to match up video and audio using a delay effect on a mixer.

Plug and play can mean something very different to manufacturers and consumers. I’ve lost count of the number of so-called plug-and-play devices I’ve encountered that require either additional drivers or system tweaking to work. The Cap-1 is as plug-and-play as it gets. Connect a camera, plug it into your computer, and voila!

In use, I’ve found that the Cap-1 performs flawlessly. Recovery from physical disconnection during operation is instant, requiring no reset procedure whatsoever. Video output is excellent, and the Cap-1 is essentially a transparent part of the signal chain.

While I’ve not used the HDMI variant of this unit, I can’t imagine that there’s any difference in performance whatsoever.

Who are the Datavideo Cap-1 and Cap-2 for?

While there are many applications for a device like this, particularly with its ease of use, it’s particularly suited to the following groups:

At present, the direct competition for this sort of device is quite small but includes the U-tap from AJA Video. This device is costlier but like all AJA gear has a tank-like build quality and is therefore far better suited to full-on production environments. The unfortunate downside of the robustness of the AJA U-tap is that it’s decidedly ugly by comparison. 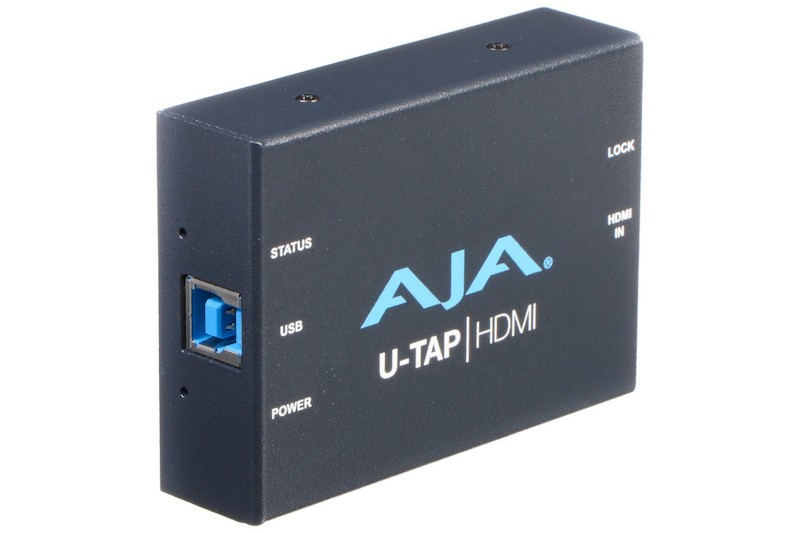 The AJA U-tap is the closest competition to the Datavideo Cap-1 and Cap-2. A far more robust device, but nowhere near as pretty.

I originally purchased this for really simple, single-camera live-streaming gigs. I won’t have to worry about carting a switcher and hardware streaming encoder along, Just a camera, mic, and laptop. However, I can imagine this device coming into use for a variety of purposes.

As the penetration of online video into day-to-day communication continues, I can see the demand for really convenient, true plug-and-play devices like this increasing, particularly when they go so far beyond the scope of traditional desktop devices.

At around £250 the Datavideo Cap-1 and Cap-2 aren’t cheap, but they’re both reliable and very easy to use. if you already have a DSLR or Mirrorless camera, combining this with the Cap1/2 will give you far greater flexibility and probably better video quality than even the best USB webcam. Having said that, you’d be hard-pushed to find a really good USB webcam for £250, anyway!

Mooma Media offers a range of video production services to individuals, small businesses, and not-for-profit organisations operating in the West Midlands region. Mooma offers competitive quotes to produce website or social media marketing videos and to film or live-stream events. To find out more about any of Mooma Media’s services, use the contact button below.

This website uses cookies to improve your experience while you navigate through the website. Out of these, the cookies that are categorized as necessary are stored on your browser as they are essential for the working of basic functionalities of the website. We also use third-party cookies that help us analyze and understand how you use this website. These cookies will be stored in your browser only with your consent. You also have the option to opt-out of these cookies. But opting out of some of these cookies may affect your browsing experience.
Necessary Always Enabled

Performance cookies are used to understand and analyze the key performance indexes of the website which helps in delivering a better user experience for the visitors.

Analytical cookies are used to understand how visitors interact with the website. These cookies help provide information on metrics the number of visitors, bounce rate, traffic source, etc.

Advertisement cookies are used to provide visitors with relevant ads and marketing campaigns. These cookies track visitors across websites and collect information to provide customized ads.

Other uncategorized cookies are those that are being analyzed and have not been classified into a category as yet.